I had two super hero dads volunteer today to come carve pumpkins with the kids.  The groups started out large and dwindled down to a few . The kids would come and go as they saw  or heard something that interested them .  At some point they all were there and participated. The kids helped  grab the yucky pumpkin goop and seeds from inside. Some of them even helped draw the designs on the pumpkin.  SO grateful for daddies that come in to play.  Thank you ! 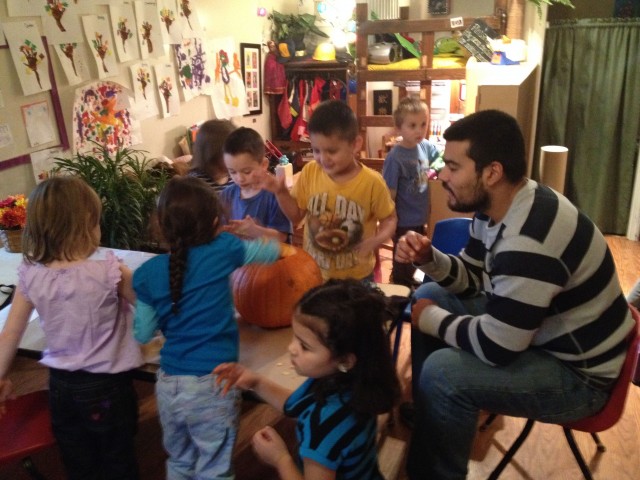 We also heard the story of ” Pumpkin Jack” which is one of my favorite Halloween stories.  It is the story of a pumpkin that was carved into a jackolantern bu a little boy and names Jack.  He loved the pumpkin but as it began to rot his mom made him throw it away.  He didnt throw it in the garbage he threw it in the garden. What do you think happened ?

The weekly reader today was about the life cycle of a pumpkin.  I have looked at the life cycle of a pumpkin for several years but the picture on the weekly reader this year was different.  It shows a little ball ( pumpkin ) right below the flower . I am not sure where I thought the pumpkin starts to grow but not there. Even I can learn in preschool !

We took a blank sheet of paper and drew pumpkins.

We did Halloween songs and poems. Every month I try to help the kids memorize a nursery rhyme.  This month is Peter Peter Pumpkin Eater .

Christmas is a Comin’