The highlight of our day was the mud pie kitchen reopening. We put it together last year but like any play area if it isnt revisited and revamped ever once in a while, it gets sad looking and no one wants to play there.

Before we delve into our mud kitchen madness let me tell you some other things we got done today. It feels so good to be back in the routine and not have the assessments looming over our head sucking the fun out of our day.

Today we talked about the sense of sight. Eyes are so important.

Carter and Baileys grandpa grew the largest sunflowers I have ever seen and brought one in for us to explore– with our eyes.  The kids loved it. At first we just used magnifiers to look at the sunflower but later we added little tongs to pull the seeds out.  ( fine motor ! ) 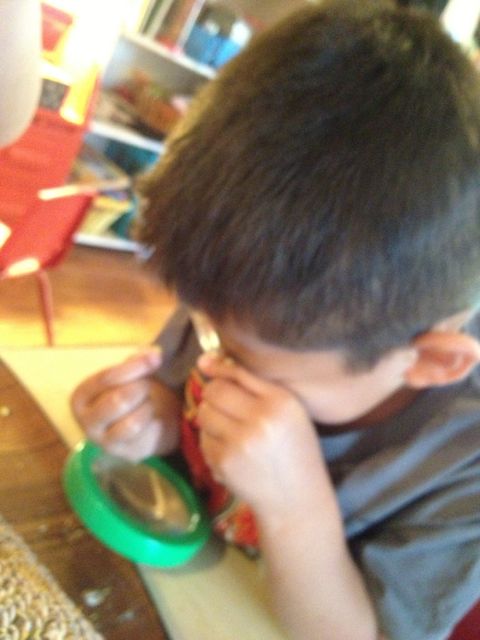 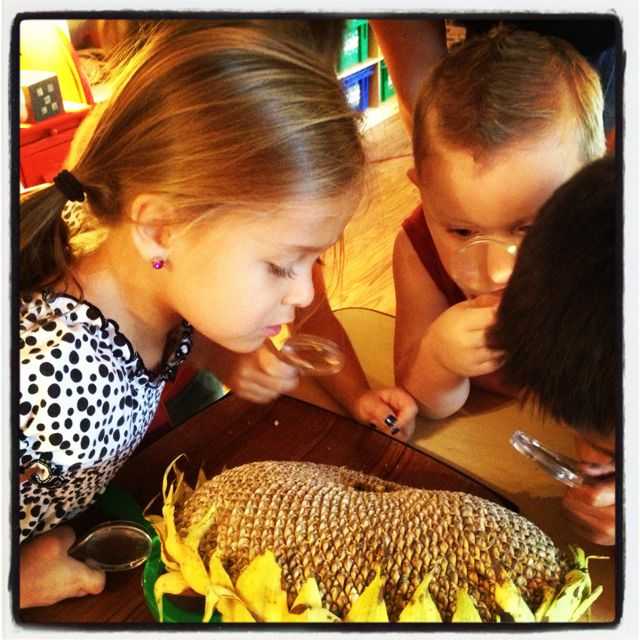 We also tried painting blind – with our eyes covered. The kids quickly found out that it was not easy. Many of them laughed at the paintings they created. 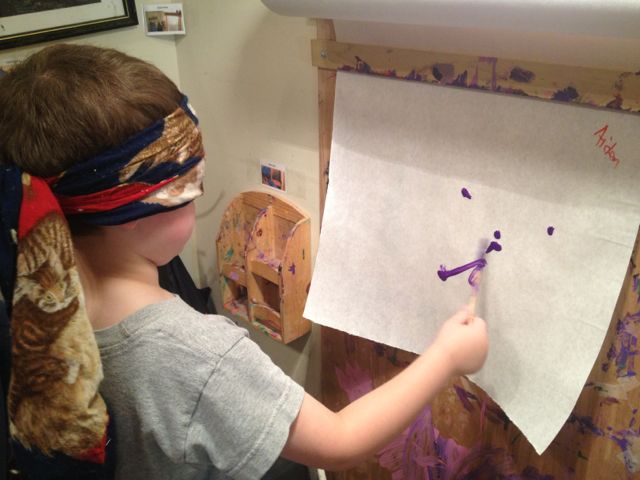 There was a shadow game on the table from the book ” Brown Bear Brown Bear .” The kids used their eyes to match the animal to its shadow. 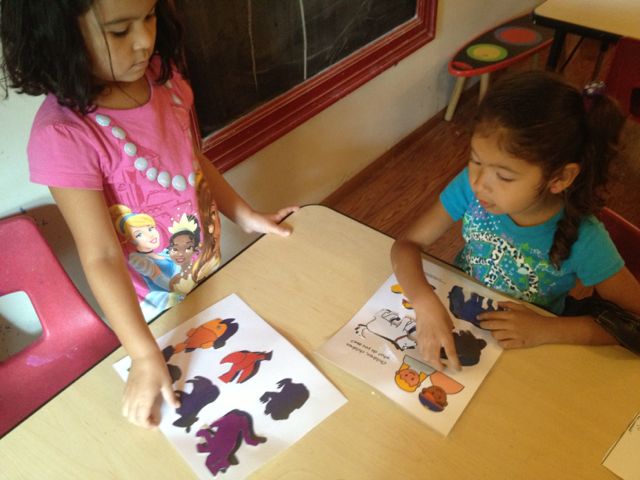 We also watched the book on You TUBE called  ? Brown Bear Brown Bear  ”

After watching the story we retold the story with our large  storytelling pieces. 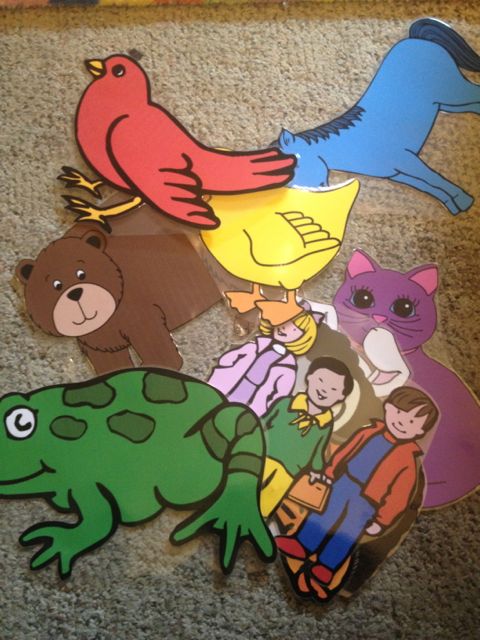 Outside the kids used magnifiers and circles to look for things in the grass and they went on a sight walk. They each had a picture checklist of things to look for .  A stop sign , a street light and a car were some of the things on the sheet . As the kids saw something on the list they marked it off. So not only were they using their eyes  to look for things they were learning that print has meaning ! 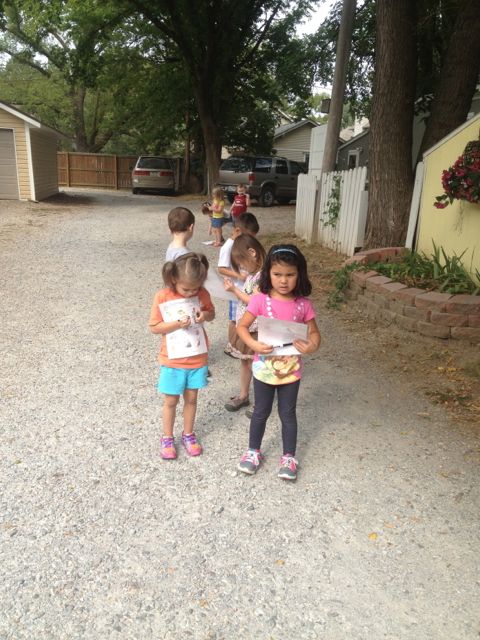 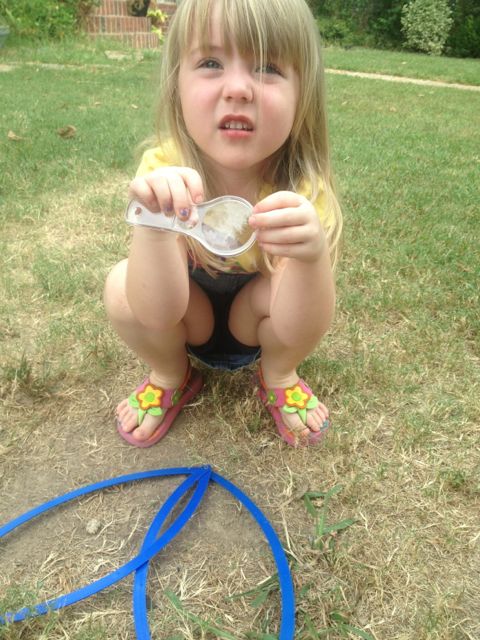 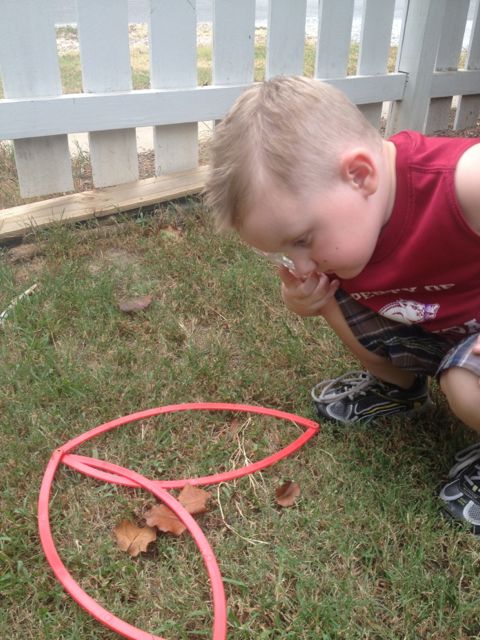 I think the Mud Kitchen was a success today . First we took the kids outside and explained HOW it all works.  I think sometimes we get upset with children not following our expectations when they really were never told how we want something to work.  I made a mud pie and explained as I went. ” I am getting some dirt from here. I am adding water from the yellow container..”  We went step by step.  The kids  have a bucket and they are even washing their dishes before they leave the kitchen !  We made up some rules.  You can see on it that using Conscious Discipline is a work in progress.  We used all NO statements and had to go back and change them to positive thinking. It isnt as easy as it sounds. When you tell a child Dont run.. what do they usually do? Run. They overlook the word dont and just hear run.  So instead we say. We walk.  Our rules for the mud kitchen ( rules are to keep us safe ) are pretty easy and short.  We take half the kids out at a time and I enjoyed getting out a few minutes early with my group to watch the kids work in their mud kitchen.  There are some good things that will happen there. 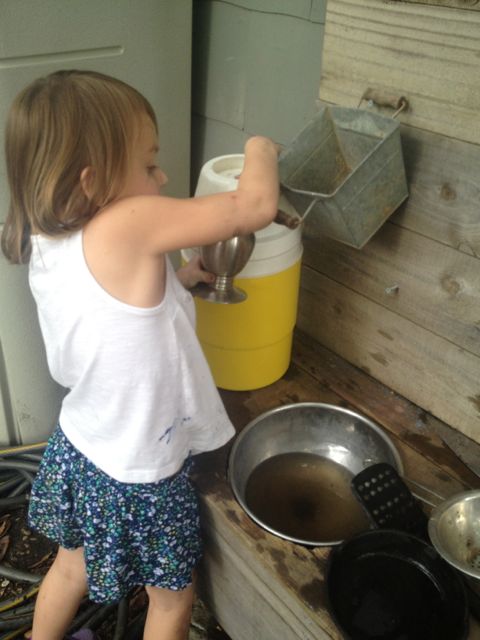 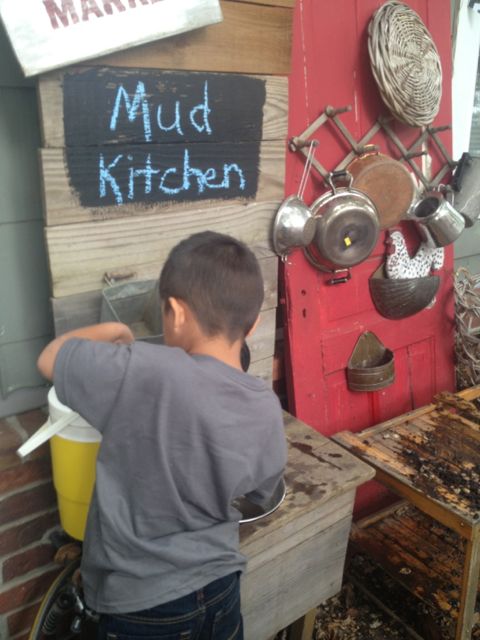 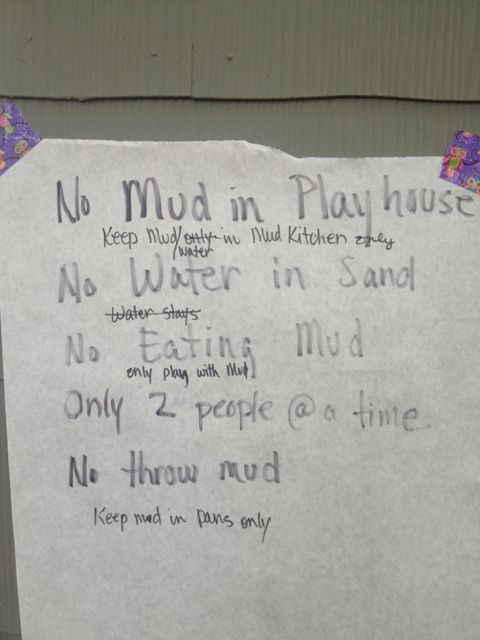 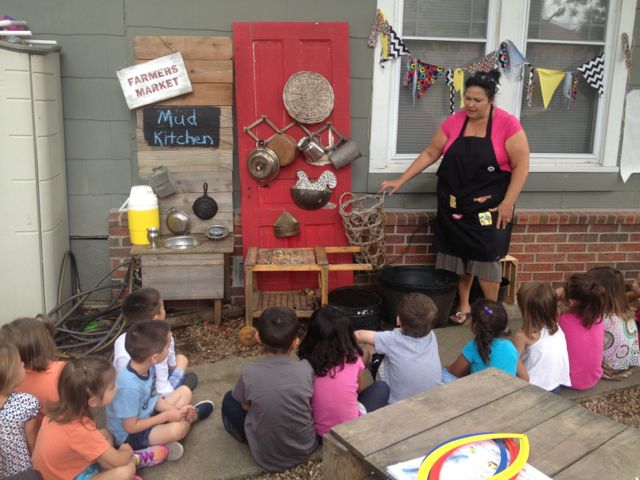 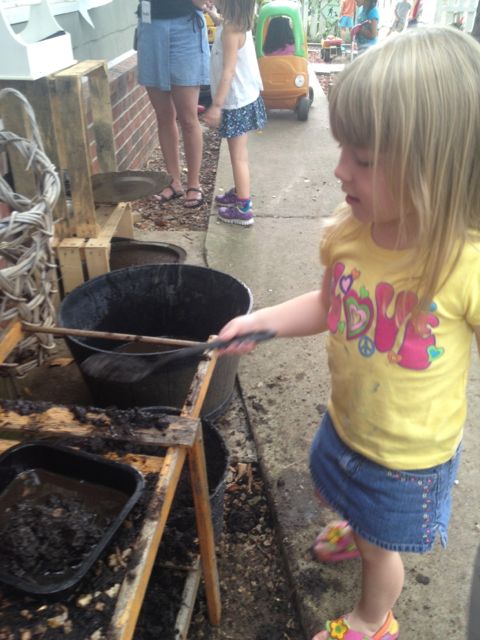 My friends at Footsteps Day Nursery made a list of reasons we SHOULD have a mud kitchen.

1.  Playing in the mud can make you happier.
Scientists have discovered something that children have always known – playing in the mud can lift your mood.  Recent studies have revealed that dirt contains microscopic bacteria called Mycobacterium vaccae which increases the levels of serotonin in our brains, helping to relax, soothe and calm.

2.  Playing in the mud connects you with nature.
If you never know something, it’s hard to care about it. Many children these days never know the outdoors beyond the school playground or their own backyards, if they even have one. Getting children outside to play (as a place to act out make believe worlds and explore) creates happy memories with the one most primal element in our world: nature.

3.  Playing in the mud can make you healthier.
Step away from the antibacterial hand wipes.  Research has shown that playing in the dirt – including very wet dirt – is good for a child’s immune system.

“So let your child be a child. Dirt is good. If your child isn’t coming in dirty every day, they’re not doing their job. They’re not building their immunological army. So it’s terribly important.” – Mary Ruebush is the author of Why Dirt Is Good: 5 Ways to Make Germs Your Friends

6.  Playing in the mud helps develop positive dispositions.
Having an area outdoors set aside for mud play – a mud patch or a mud pie kitchen for example – provides a space for children to retreat to for some time alone in a soothing sensory experience or to play with peers co-operating, communicating, negotiating and sharing.

7.  Mud is a wonderful art medium.
Mud can be molded and decorated and it responds differently than sand, clay or playdough.  For ideas hop on over to The Art of Mud from Artful Adventures.

8.  Mud play welcomes all comers.
Mud is an open ended material that meets the different needs and interests of different children.  A younger child might be right into the sensory experience while older preschoolers are busy making their own mud bricks.  With mud, there is something for everyone.

9.  Playing in the mud encourages creative thinking.
Playing with open-ended materials like mud stimulate creativity and imagination – things that are hard to jump start later in life.

10.  Childhood memories.
Think back to your own childhood.  Do you have happy memories of playing outside in the mud and the dirt?  After all, making mud pies is one of the iconic images of childhood.  We are creating the experiences, the memories and the childhoods of today’s children.   What do we want them to remember?

It was a good day.