This morning after getting in from the gym I opened some mail and found this  !  I was so excited  and humbled at the same time.  Immediately , I thought how much  I wanted to call my mom.  My mom and dad are both gone and have been for 6 years.  I think of them often but rarely get emotional .  For some reason today I could NOT shake the tears. 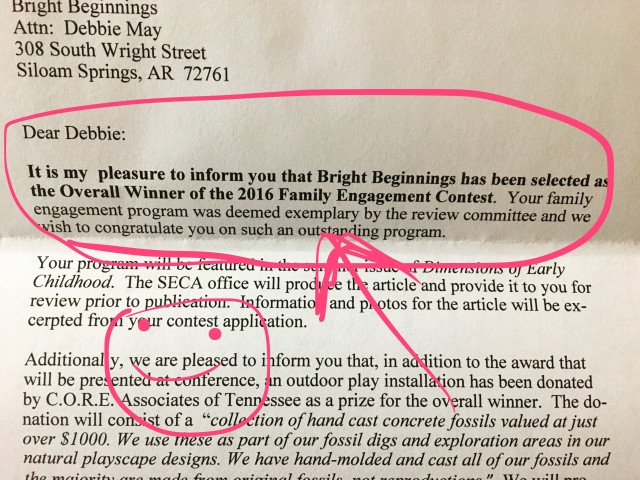 Every time someone would text to say Congrats or call I would start up again.  During family time the kids wished me well .  Lord have mercy…. I fell apart again. Dallas explained to them that I had gotten a big award and I was so happy.  Consequently, the kids tried to make me feel better all day by drawing pictures of me.  🙂 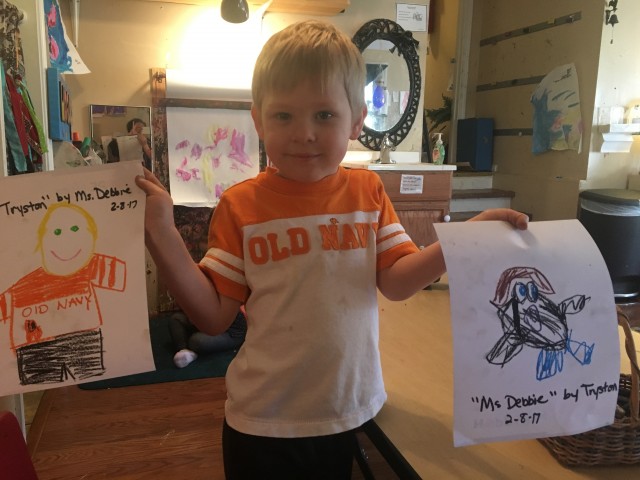 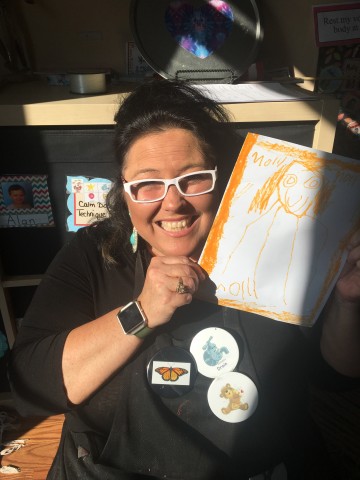 When the representative from the Southern Early Childhood Association came to visit she told me I was a finalist with three others and one of them was the University of Alabama.  I never in my wildest dreams thought we would win.   The prize is fossils of some sort  for the playground and recognition at the SECA conference . The prize is so unimportant . Its the validation that we ( Bright Beginnings, me, Randy, Dallas , and you guys and all the people that support us ) are doing something good and worthwhile. My heart is full.

Other things we did today : 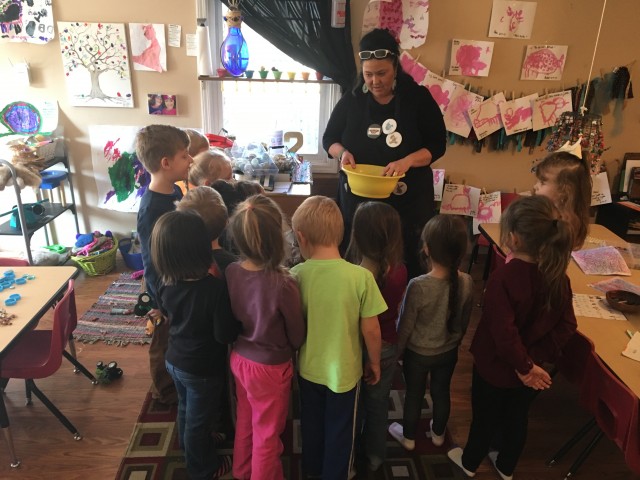 Then it only made sense to do some comparisons with a scale. 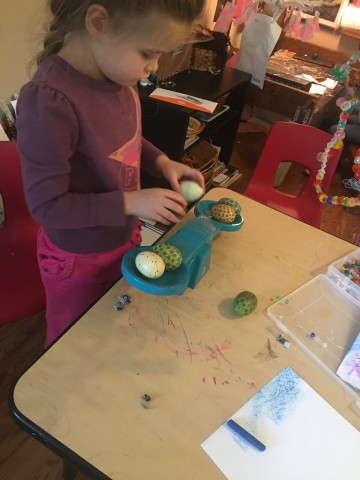 We also read “If you give a Pig a Pancake .” Do pigs eat pancakes ? What letter do pig and pancake start with ?  Obviously, we had to FaceTime my niece with her pig ” Hammy Jo” to ask about the pancake issues.  She said he eats everything !  She gave him a tortilla so he would do a trick ( sit ) and he did. We could hear him smacking. 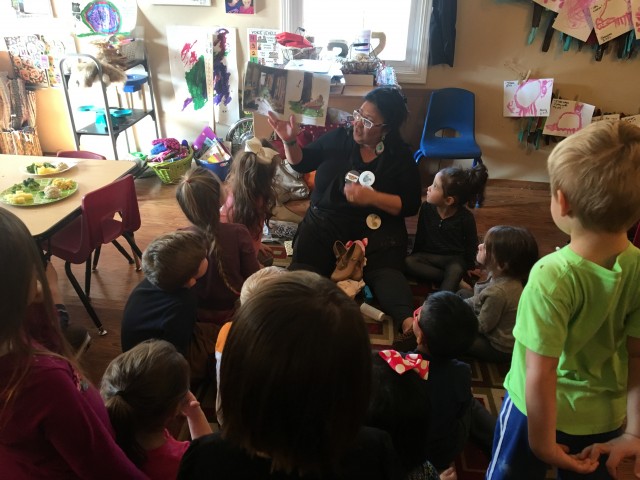 Outside we played a game !  The farm animals were placed around the yard in a circle.  The children ran around the circle . As they came to an animal they hopped over it and made the sound it makes. Funniest game ever. 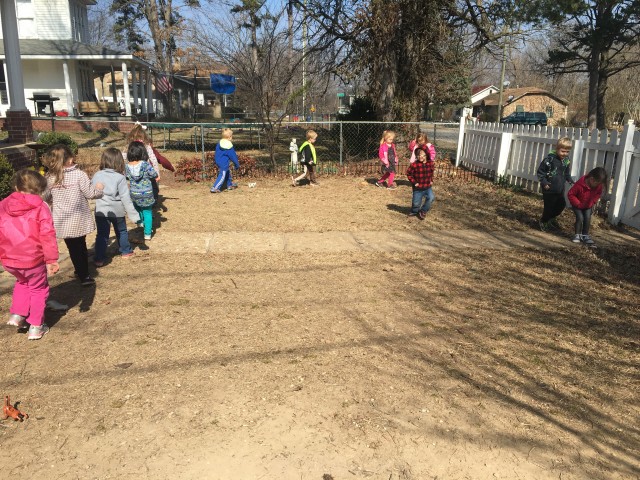 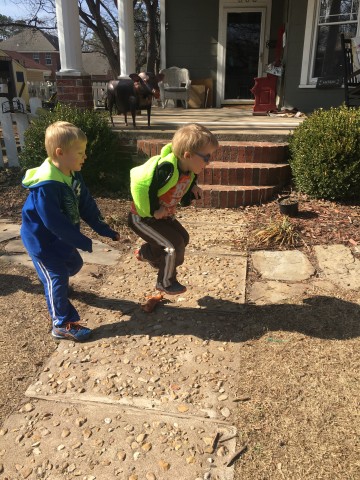 Being in a home program we learn a lot just from every day occurrences like a visit with the recycle man.  The kids love when he comes by. 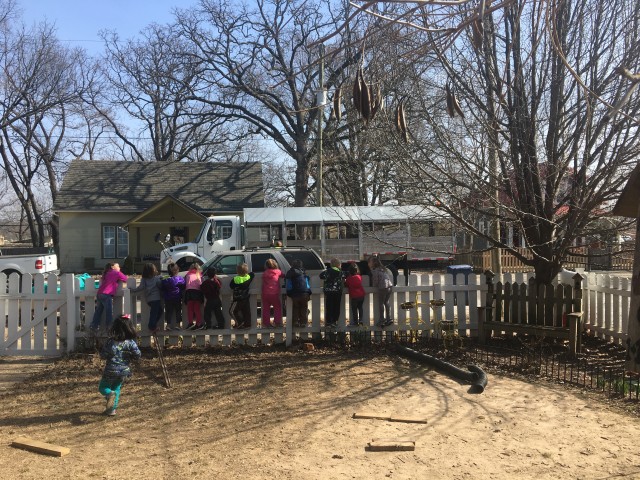 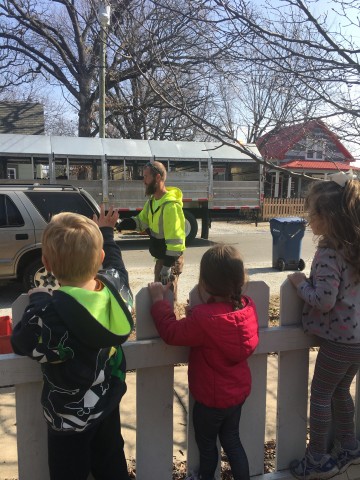 Today he stopped to talk. I told him the kids love it and he said ” They almost always heckle me.” Hmm….. as he left Parker kindly yelled ‘ Thanks for taking our trash.”  She meant it in a kind way.  It made us all smile. 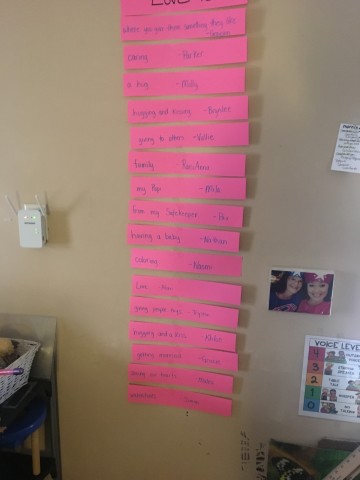