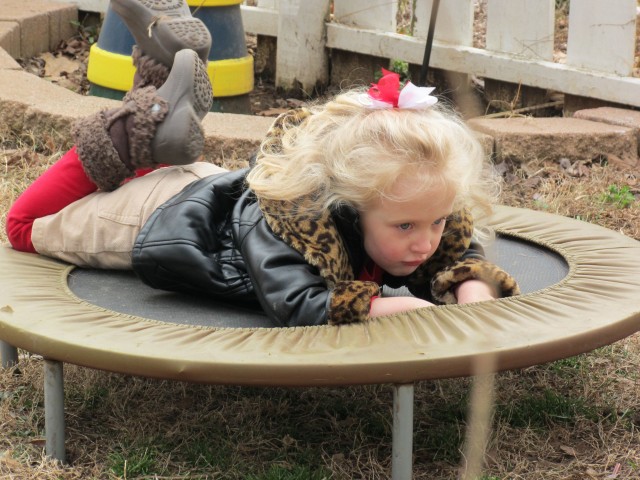 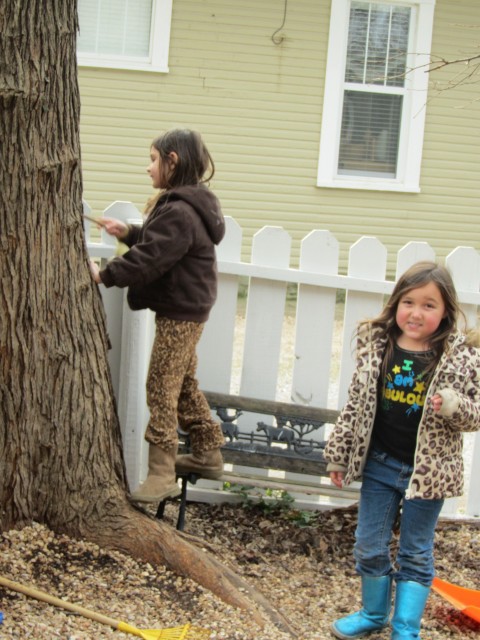 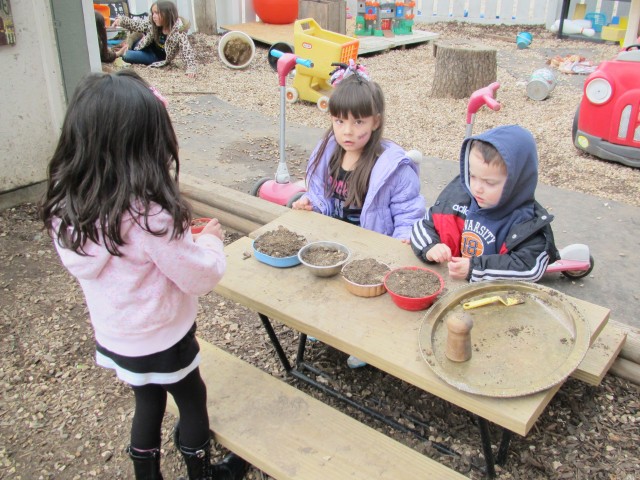 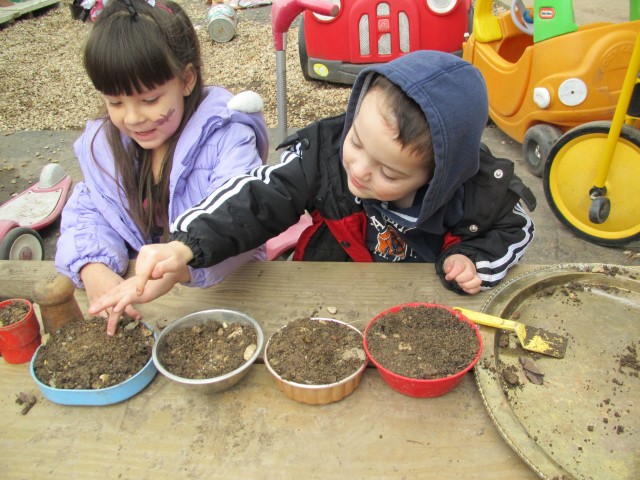 After being sick yesterday afternoon and a little last night I was pumped to get today started.  You don’t realize how much you move around with these kids until you have a day that when you DO move your head does a little whirling… and whirling.

In small groups today we went over some concepts that most of the kids already know.  In front of, behind, beside, on top of and underneath.  I also did a little assessment on the body parts again . The ones that many miss ( ankle, forehead, wrist ) many of these guys all got !

I went outside today with Danielle and the kids.  I rarely get to go outside and when I do I am always amazed at what is learned out there.  There is so much going on out there it is hard to document it all.  Teachable moments are EVERYWHERE !

As we watched the kids play Danielle said ” How do you keep the boys from wrestling? No matter how many times I say stop , they still do it.  ”  Great question.  Wrestling for boys is as natural as picking up baby dolls with girls..   It is like trying to herd cats. They are going to find another way to do it. Flag football ! Tag !  Hoppy Ball Race ! No matter what it all ends up in a huge pile of boys.  And yes, inevitably someone gets hurt.  As we were having this discussion  it happened. Someone got hurt. I was able to share a teachable moment with Danielle. Immediately the hurt boy yells ” Ms Debbie…. he hit me”  I respond ” Were you wrestling?”  Yes.. but….. I jump in ” Then you two need to work it out.”  For ten minutes they stood there and talked.  I told Danielle to watch their faces.  The conversation going on was priceless.  Then another friend jumped in to mediate.  The boys started telling him how their minor altercation started.  Eventually they got it all worked out and started to play again.  What would have been accomplished if I had jumped in and said ” Ok, everyone stop and go sit . We don’t hit.” ?  In situations like this is where kids first experience empathy, which is SO important.  This is where they learn to talk about differences and work problems out without their hands.  I was so proud of these two boys and the third that joined to mediate. This .. is what preschool is for.  Life experience that a worksheet can’t teach you. Life experience that an ill equipped teacher that just wants her day to be worry free doesn’t take the time to allow the process of learning and growing to even begin.  No, I don’t encourage wrestling.  We discourage it.  But when it happens, and it will, we want something positive to come out of it.  It is actually situations like this that I say ” wow… we are doing a great job.” SO much more than if a child recites his ABC’s and counts to 20.  Smart kids are everywhere but well balanced kids that can stand on their on two feet and be productive in society don’t  just ” happen” , they are built… moment by moment and circumstance by circumstance. 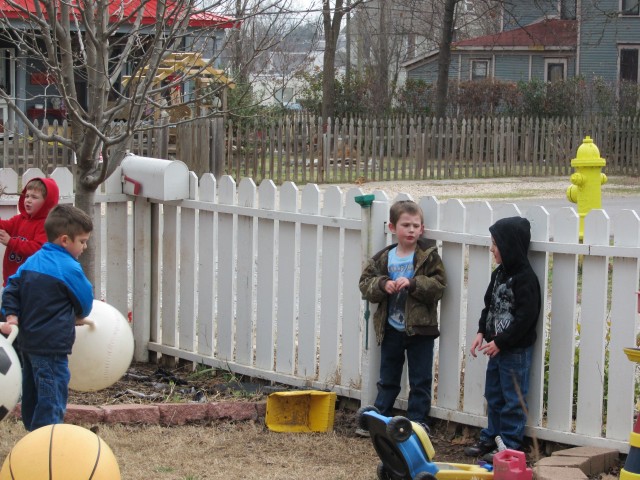 Some inside fun today !  The plumber came and fixed our sink AGAIN in the bathroom. We have moved from an automatic sink to a regular faucet . Lets hope this time its trouble free.

More outside play !  Check out the different muscles they are using that they don’t use during inside play time.  Outside play is SO important in the development of large muscles.  Thanks for being parents that understand that and making sure your kids are dressed for the weather so we can enjoy the outside ! 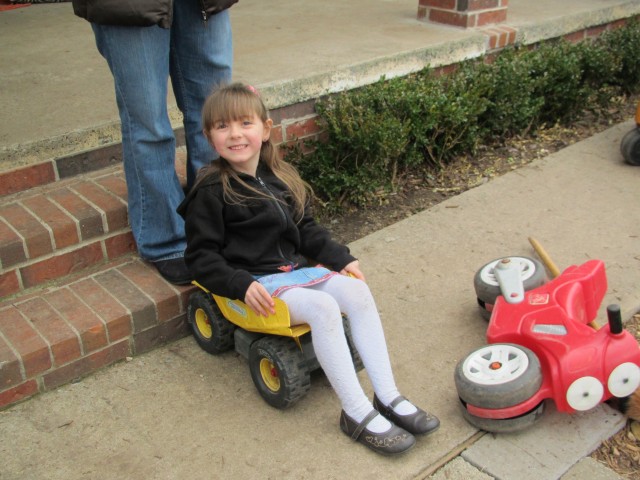 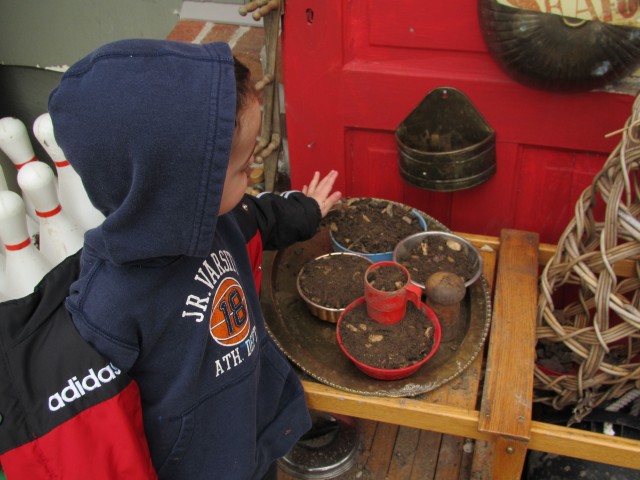 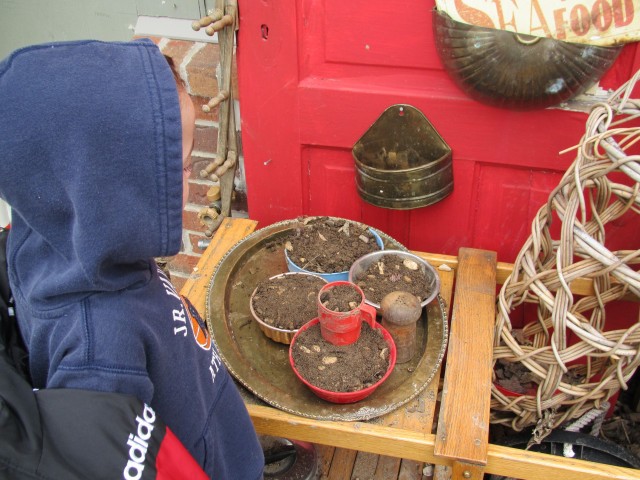 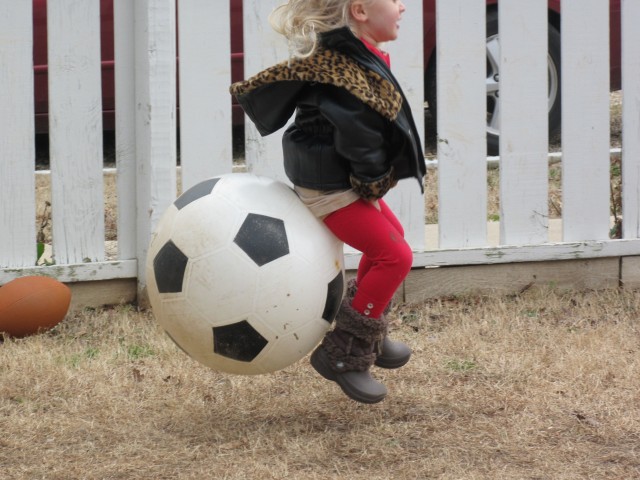 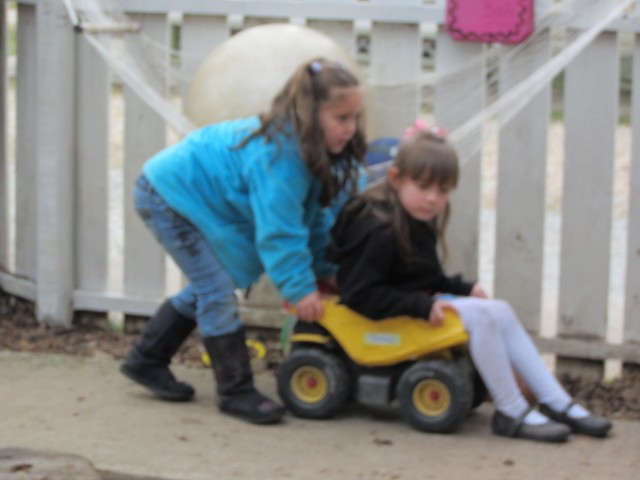 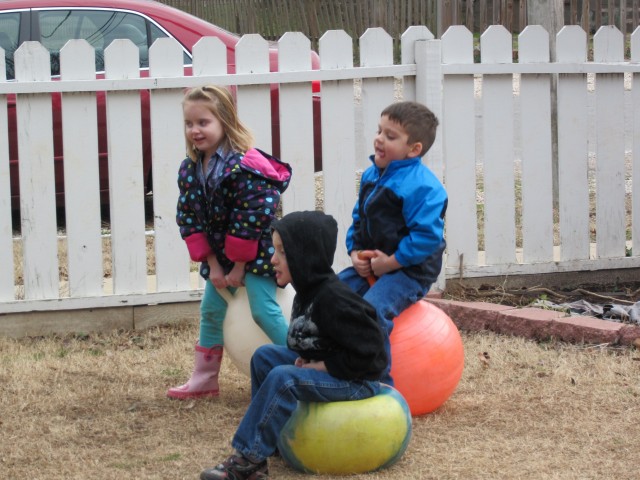 Such a good blog today, Miss Debbie. I thoroughly enjoyed it. I even read it out loud to Grandpa Jim and Chelsea. Thank you for teaching the kids to think about how to solve the problem instead of just using their fists and crying. You, Mister Randy and Miss Danielle are so good for those kids. I can’t wait until Bailey and Carter get to experience it with you three. Thank you so much for everything you do for the kids, parents and grandparents.

You said it well Ms Debbie!! All those hidden teaching moments that don’t get the due they need. It’s not all about the academic in preschool… it is sooooo much more. It takes special people to do this job, and do it well… Your trio does it GREAT!!!
And by the way… I wish you could be here when my 4 boys begin wrestling,maybe they would listen to you a little better, because my saying is, “It’s all fun and games until someone gets hurt, and someone ALWAYS gets hurt!!” they don’t heed my warning and someone ultimately gets hurt, angry, or sore at the other. I try the talking it out approach, but I guess siblings don’t always want to see the others point of view, but I keep trying. I’d say being a mother of 4 boys assures me a special place in Heaven 😉 Have a Great Weekend!!!