Bright Beginnings Preschool > animals in the woods > Wrapping up the Week

I love having parents around during free play in the morning .  It is great for them to see what we do each day and how many learning materials the children are exposed to throughout the day.  I especially love it when Ashley comes to play since she is going to school to be a teacher! 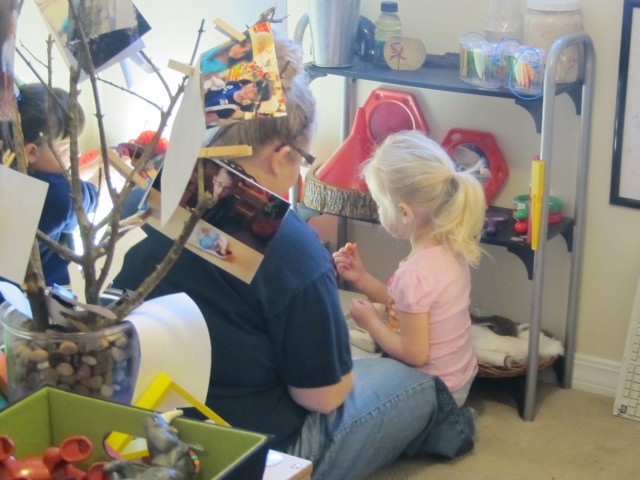 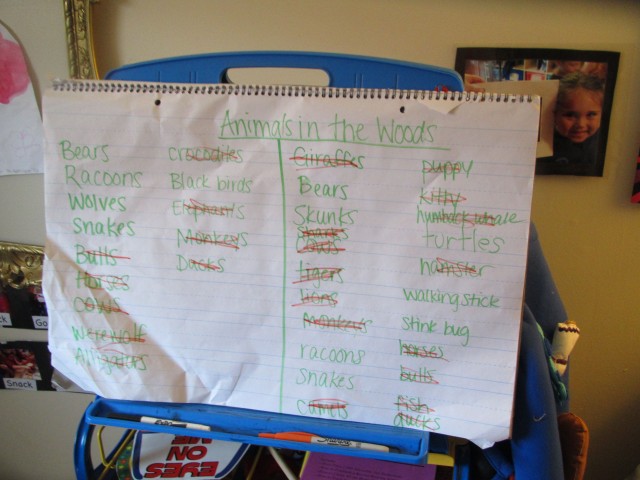 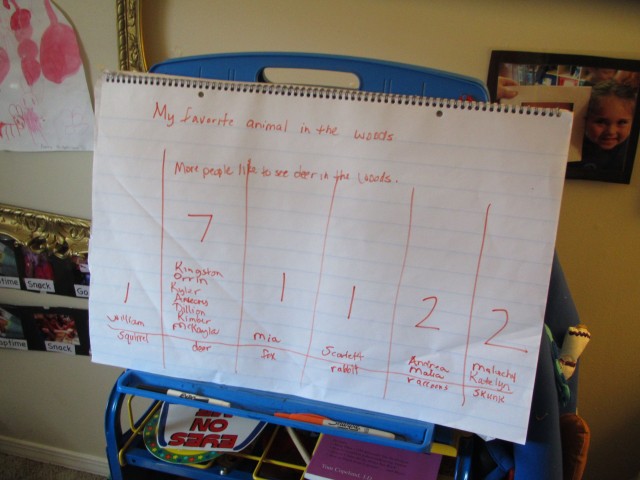 Danielle is organizing more things in my resource room and as I went up this morning to grab something some new art tools that had been hiding from my were within sight so I brought them down for the kids to explore with them. 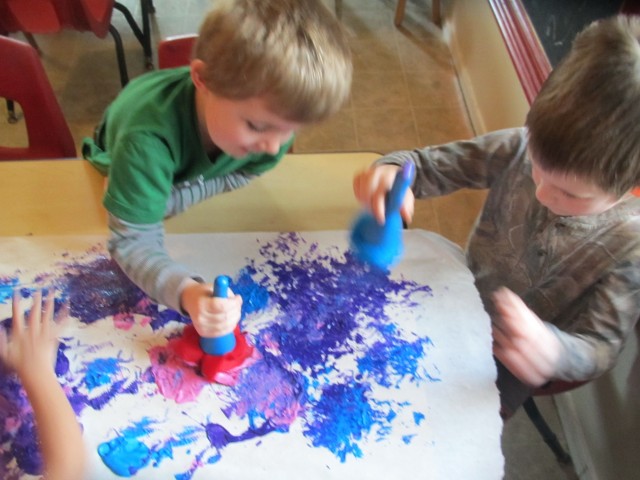 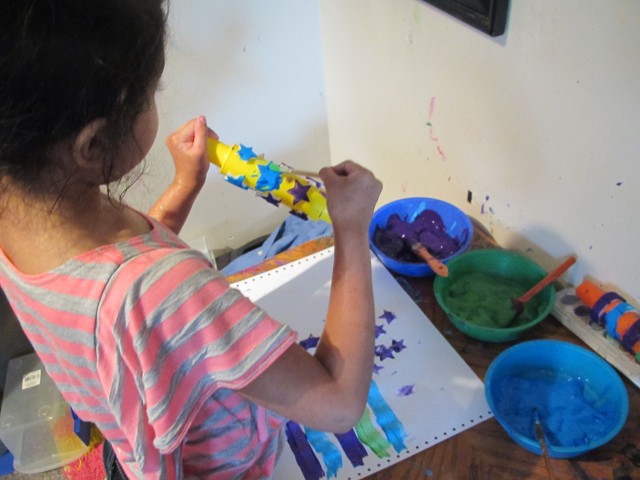 And look at the beautiful picture that Andrea made. 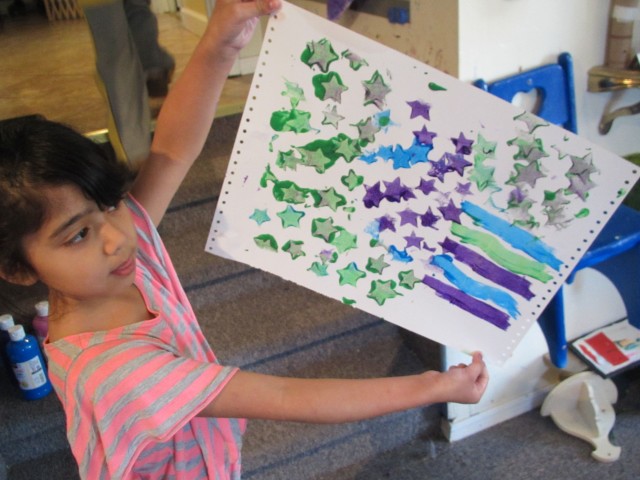 Other things that made me smile today : 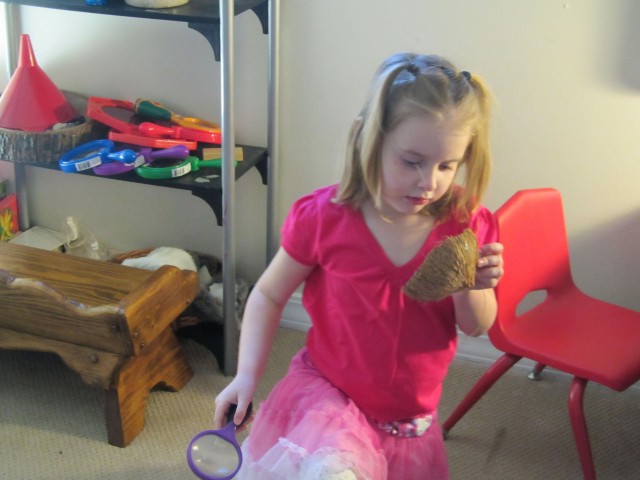 Scarlett really checking out the coconut shells that we placed in the science area after yesterday’s experiment. 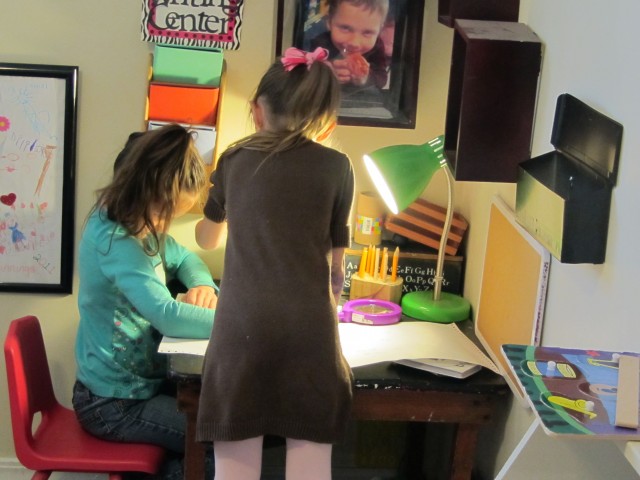 I know I snap a lot of pictures here but they always look so cute and cozy there. And this time I noticed Kyler peering through a frame.  Someone had taken the 8 X 10 of Kyler and placed it there. It looks as though he is supervising the area with a smile.

**** One a side note.  Two of our friends have had Fifths Disease.  Here is some information from the KIDS HEALTH website about it.  The word disease is a strong word to use – it is a viral type rash.  Once you see the rash…  the contagious period is over .

Fifth disease, which is especially common in kids between the ages of 5 and 15, usually produces a distinctive red rash on the face that makes a child appear to have a “slapped cheek.” The rash then spreads to the trunk, arms, and legs.

Fifth disease is actually just a viral illness that most kids recover from quickly and without complications.

Studies show that although 40% to 60% of adults worldwide have laboratory evidence of a past parvovirus B19 infection, most can’t remember having had symptoms of fifth disease. This leads medical experts to believe that most people with a B19 infection have either very mild symptoms or no symptoms at all.

Fifth disease occurs everywhere in the world. Outbreaks tend to happen in the late winter and early spring, but there can be sporadic cases of the disease throughout the year.

Fifth disease begins with a low-grade fever, headache, and mild cold-like symptoms (a stuffy or runny nose). These symptoms pass, and the illness seems to be gone until a rash appears a few days later.

The bright red rash usually begins on the face. Several days later, the rash spreads and red blotches (usually lighter in color) extend down to the trunk, arms, and legs. The rash usually spares the palms of the hands and soles of the feet. As the centers of the blotches begin to clear, the rash takes on a lacy net-like appearance. Kids younger than 10 years old are most likely to get the rash.

Older kids and adults sometimes complain that the rash itches, but most kids with a rash do not look sick and no longer have fever. Certain stimuli (including sunlight, heat, exercise, and stress) may reactivate the rash until it completely fades. It may take 1 to 3 weeks for the rash to completely clear, and during that time it may seem to worsen until it finally fades away entirely.

Other symptoms that sometimes occur with fifth disease include swollen glands, red eyes, sore throat, diarrhea, and rarely, rashes that look like blisters or bruises.