In the whole wide world.

In the whooooooooooolllllleee  wide world.

We read several books today.   One was about ” a puppy is born.” Ok..  I skipped several pages. I believe in being honest about life and how it begins but A. thats not my job to tell your kiddos  and B.  Ewww….

We took a walk to the PINK POODLE today to visit Tara and see what happens at a pet salon.  The PINK POODLE is where Sport our dog gets groomed and stays when we are out of town.  Perhaps I was drawn because of the pink and the chandeliers but they are really nice people. 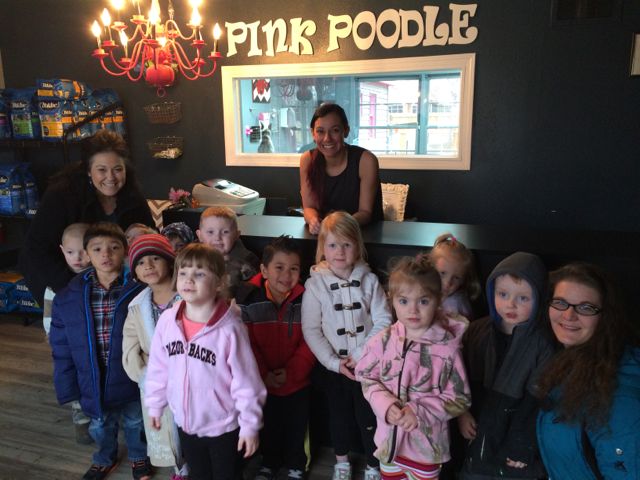 Tara showed us where the dogs stay when they spent the night.  There are large clean kennels .

She showed us a dog ( Buddy ) who was getting groomed while we were there. 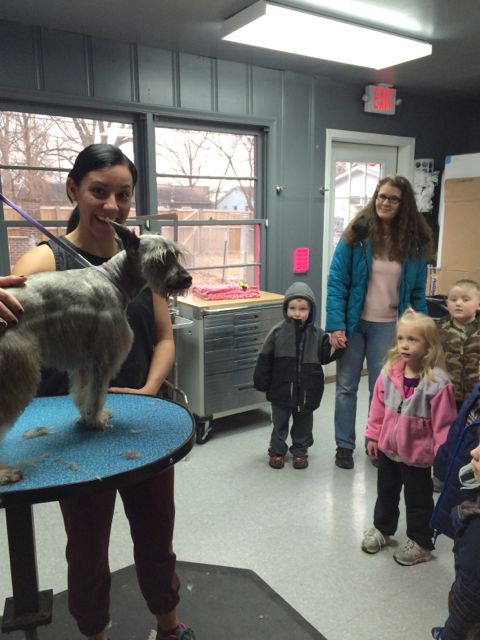 There was even a blow drying room ! 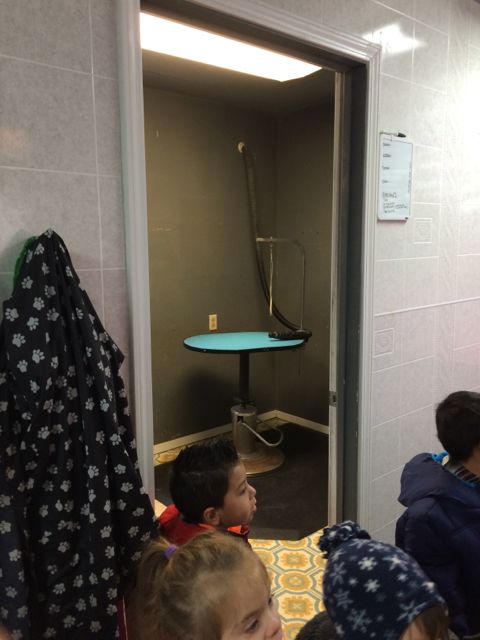 She had two dogs that were her’s in the back yard.

We visited the room where the dogs that are waiting to be groomed stay in smaller kennels. 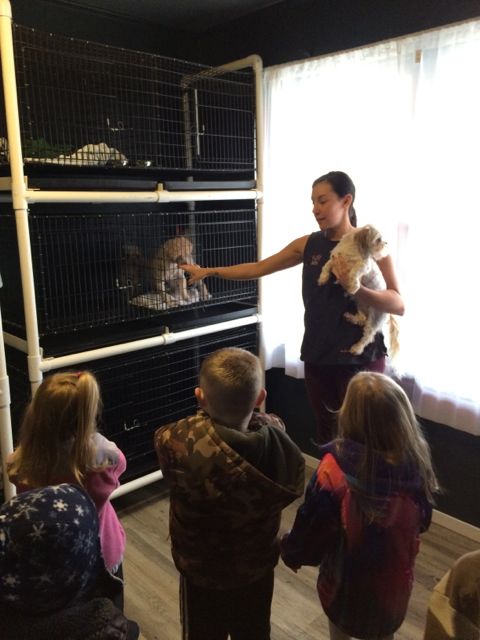 Ms Tara has clothes for sale in her shop for DOGS! We saw dresses and raincoats and monster hoodies. 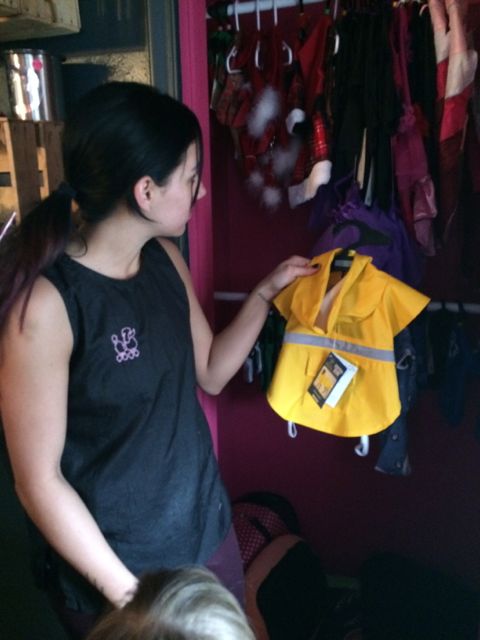 It was a fun walking field trip.  The kiddos are getting really good at walking and staying in a ” sandwich ” to keep us safe. We practice listening for cars and looking both ways.  We practice walking quickly across streets in case a car comes out of no where.  We look for numbers on houses and letters on buildings. Today as we walked we looked for peoples pets that were outside. If we saw a cat we quietly said ” meow meow.” If we saw a dog we quietly said ” woof, woof.”

Other things we did today was we cooked.  We made puppy chow ! We are going to have it for snack. If you have never had puppy chow it is YUMMY !  Here is the recipe.

Virtually every recipe goes roughly as follows: Put 9 cups of cereal (again, Chex or Crispix are ideal) in a bowl and set it aside. Then microwave 1 cup of semisweet chocolate chips, 1/2 cup of peanut butter, and 1/4 cup of butter or margarine for 30-second increments until the mixture can be stirred to a smooth consistency. Stir in 1 teaspoon vanilla and a pinch of salt, and then pour it over your bowl of cereal, mixing until it’s evenly coated. Then dump it into a 2-gallon zipper-lock bag, add in 1 1/2 cups of powdered sugar, and shake. Yup, it’s that simple. 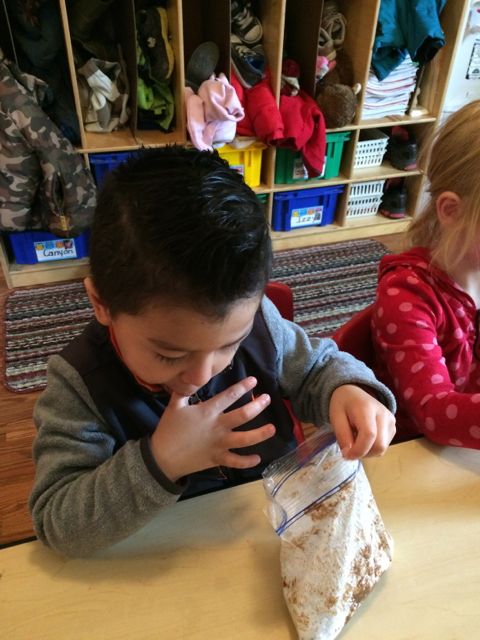 We also did a letter recognition game .  The puppy puppet would pick up a letter and hand it to a friend and the friend would tell us what the letter was and what sound it makes. 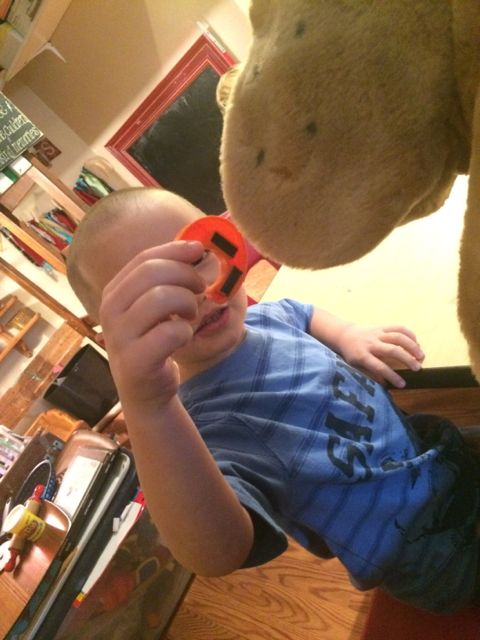 Ms Dallas did an observation math game also.  She took a group of dogs of varying colors and sizes and put them on the table. The children talked about how they were the same and different.  Some were smaller and some were larger .  Some dogs were brown and some were black.  They also lined them up from smallest to largest. 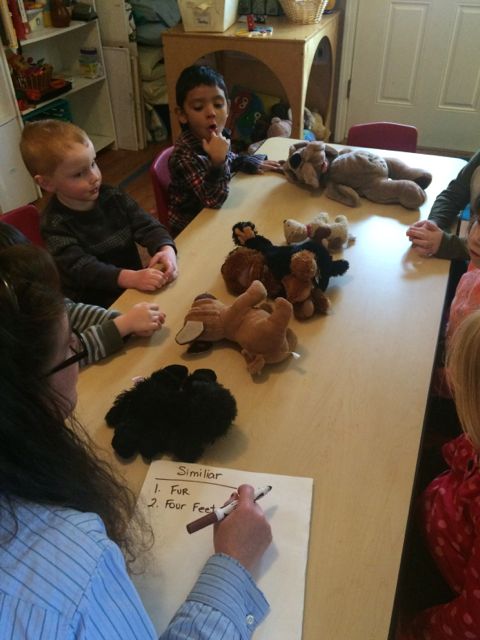