Today was the day we have worked toward all week. We have talked about what we think Super Heroes are . We have talked about Super Heroes are safe, responsible and respectful and what that looks and sounds like to a preschooler.  After breakfast this morning we reviewed what we had talked about all week.   We were reminded that Super Heroes don’t kick or hit other Super Heroes  and that there are no ” bad guys ” in our preschool family. We are all Super Heroes.  In conscious discipline we are taught to use If / then statements.  The only rules we had once we took the costumes out are that Super Heroes are Kind.  If you hit or kick,  then you will need to take off your costume.  Sadly a couple  of our friends had to turn in their badge before the morning was over but for the most part it went really well.  The kids would even take and trade off costumes with their friends. 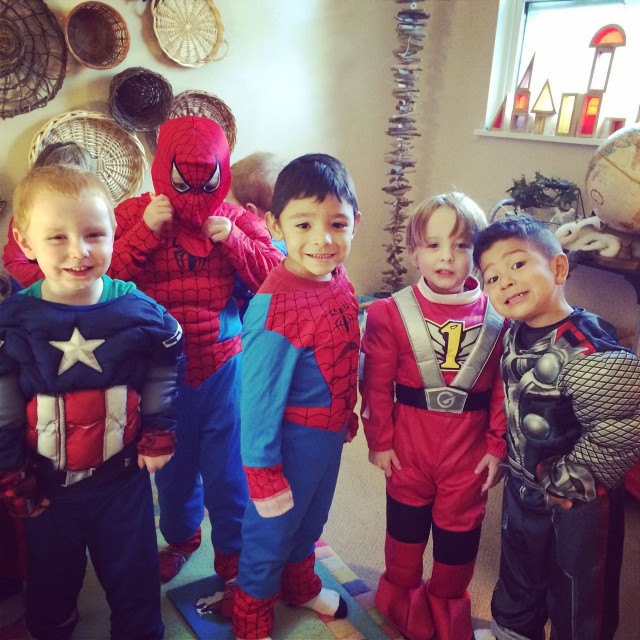 As you know we are doing a unit on Super Heroes because we had so much going on already and we wanted to make sure it was done safely.  We still have another week of Super Hero play.  I found an article that explains why I dont just say ” NO one can play Super Hero , it is banned from preschool. ”  This article is from Education.com and written by Karen Perez. 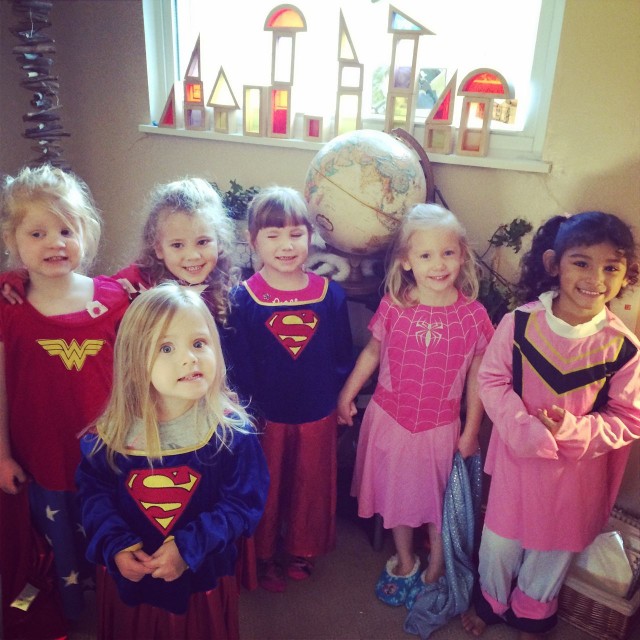 “Pow! Take that! And that!” You look on as two innocent kids proceed to hit each other with lightsabers and pretend to chop each other’s heads off—not quite what you thought childhood play should look like. But should you ban superhero play, or try to keep it nonviolent?

Dr. Stuart Brown, the founder and president of the National Institute for Play, and author of Play: How It Shapes the Brain, Opens the Imagination, and Invigorates the Soul, says the answer is not as simple as you might think.

Sure, superhero play can seem like nothing more than violence, violence and more violence, but there’s a lot going on beneath the surface of this controversial rough-and-tumble play. “Empowerment is an innate need and desire, and the empowerment that a child receives through mimicking a superhero is not an abnormal urge, by any means,” Brown says. By allowing your child to experiment with how it feels to be Batman, you’re allowing him to feel a sense of empowerment that kids need. 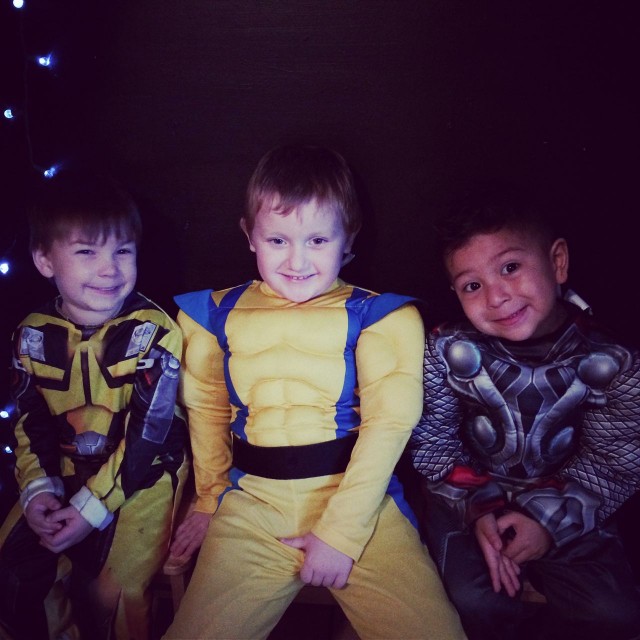 Some research shows that violent adults may have gotten their start on the playground, pretending to be superheroes, but these studies can be misleading, Brown says. “If there has been abuse, or if taboos of violence within a home are broken—due to issues such as parental violence, sibling cruelty or methodical bullying—it can lead to a distortion of what would be normal rough-and-tumble play,” he says. But kids who grow up in a healthy environment aren’t as likely to engage in the same behavior, he says, and superhero play helps kids feel more in control of themselves and the world around them, which can improve their social skills.

Even if the superhero play starts off as fun for both children, keep an eye out just in case it starts getting too rough. “If two kids are wrestling, and one kid is being pinned, and they’re smiling at each other while it happens … that’s fine,” says Brown. But if one child is enjoying it and the other is definitely not, it’s time for some adult intervention. Help them understand where one of them stepped over the line and how they can resolve the conflict next time.

Superhero play can be a lot of fun, and it can help little ones identify with different types of people—including bullies and victims. But make sure that your kid knows how to stand up for himself or for others if superhero play becomes cruel. “There’s a difference between teasing and deep humiliation of a fellow player,” Brown says. “Teasing is an important and normal part of kids’ interchanges. But when it goes over the line, which it does on occasion, it’s time to step in.” Talk to the offending child about how he would feel if she were put in the same situation.

Exceptions to the Rule

For a child with “fairly serious ADHD who is impulse-ridden and has some of the organic signs of really serious hyperactivity and impulse control,” superhero play can create issues that are probably better to avoid, says Brown. Keep in mind, however, that these kids represent the minority of kids with ADHD—those with extreme symptoms that can make intense play dangerous.

Another exception to the rule involves mismatched pairs of kids—for example, an introverted younger sibling and an extroverted, fearless older sibling. In this case, parents should protect the younger child and help the older child gain the necessary social skills to make superhero play safe and appropriate.

Think that superhero play is devoid of moral values? Think again. Most superheroes put their lives on the line to catch criminals and help people in need or trouble. Point out these qualities of character. “Moral characteristics that can be instilled in the heroic narrative, even if they aren’t always as immediately viscerally exciting, are important content to try to convey,” Brown suggests. Kids want to challenge the world and to change it for the better. Tap into that drive by pointing out the ways that superheroes are trying their hardest to do the right thing.

The next time your child dresses up in a cape and tights, stop cringing. Instead, use the opportunity to teach him about the world and about his own ability to reach great heights—figuratively, if not literally.